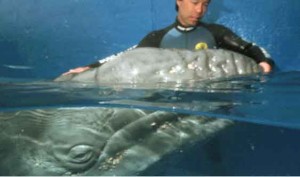 J.J. with her trainer at SeaWorld San Diego 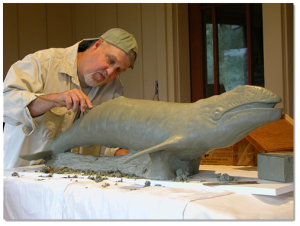 Life-sized statue of J.J. in studio

On January 11, 1997, a newborn gray whale was rescued from a beach in Marina del Rey, CA. Named J.J., the baby whale was successfully rehabilitated at SeaWorld San Diego. Fourteen months later, J.J. was almost 18,000 pounds heavier and 18 feet longer than when she was found. She was released  into the ocean about 2 miles off Point Loma, the largest animal ever released into the wild.

Friends of La Jolla Shores decided to replace the much loved dolphin sculptures in the children’s playground, which had deteriorated beyond repair . . . what could be more fun than a life-sized bronze sculpture of “J.J. the Orphaned Baby Gray Whale”® at one week old… accurate in every detail, according to the experts who saved and raised her.

D. Lynn Reeves, the Artist, worked closely with J.J.’s Veterinarian and Trainers, and didn’t stop making changes until they said he had her “just right!”… so much so that when they looked at her eyes, they felt like she was looking at them! BronzeArtwork, a local foundry, documented every step of the way and we posted J.J.’s progress on our website for all to follow…another educational opportunity.

“J.J. Day” was the 15th of May, 2011 and J.J. was joined at the Birch Aquarium by Bev Hoskinson, the woman who found her in Marina Del Rey, and nine of J.J.’s SeaWorld Trainers and several hundred community members to give her a royal welcome. She was installed in the children’s playground in Kellogg Park the next day. 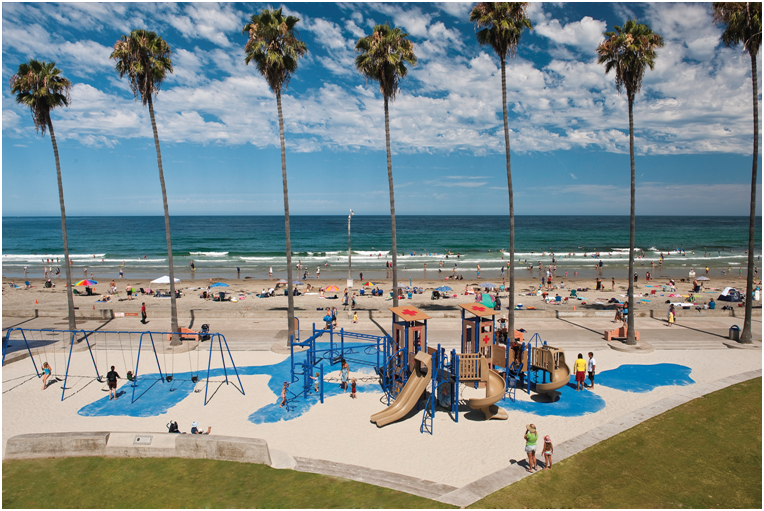